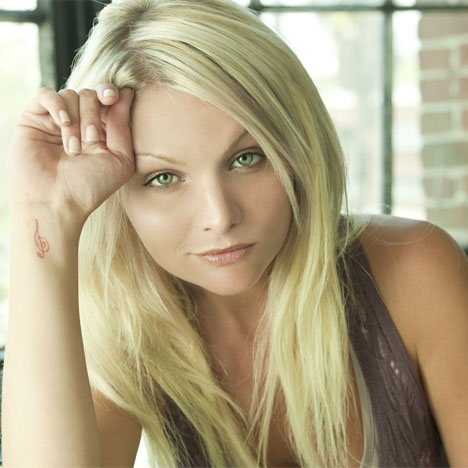 Singer/Songwriter Erin Boheme was born in 1986 in Oshkosh, Wisconsin. This homespun Midwestern recording artist had natural musical instincts from the very beginning. In a span of only two records over the course of the past seven years, Boheme has established herself as a formidable figure in the long and rich tradition of original female vocalists. She is a versatile artist with the capacity to transcend widely accepted musical boundaries and embrace a broad range of innovative styles on the musical landscape. In What A Life (produced by Michael Bublé), she expands her artistic reach with a collection of ten songs which showcase her evolving skills as a songwriter while exploring even more of the diverse terrain of American popular music.

“When I was younger, I somehow knew that music would encompass my life,” Boheme says. “The training I had was listening. I listened to the greats: Ella, Stevie, and Billie. I would sit down, fixated on the incredible way they all used their voices. That in itself was a master class on vocals. That was my training ground, and it doesn’t get any better.”

Growing up, her taste in music was as aggressive as her forward position on the soccer field. She introduced her friends to the stylings of Frank Sinatra and B.B. King, and with the ease of the soccer ball, she would pass around these classics to them, carefully avoiding the opposition’s dribblings of bubblegum pop and techno dance recordings. In her teens, her ideas of romantic music included duets by Marvin Gaye and Tammy Terrell; Donny Hathaway and Roberta Flack. Boheme’s definitions of ‘cool’ included Chet Baker, and Earth Wind and Fire.

Erin has always been a ‘hopeless romantic’ – beginning with her very first boyfriends: Cary Grant, Frank Sinatra, and Gene Kelly. She was with them in the theatre, on television, and in their DVD’s – devoted to all of these ‘boys’ at the tender age of ten! (She couldn’t even spell ‘Timberlake’). So it was inevitable that Erin would end up in Hollywood, because that is where she knew she belonged.

As soon as she arrived in LA, she competed on the television show Star Search, and much like Alanis Morissette before her – she lost! This only energized her more to pursue her singing career. She trained with the improv group The Groundlings, because she knew that each song she sang was an acting exercise. She contacted Oshkosh native Mike Melvoin (a composer/arranger who worked with John Lennon, The Jackson Five, and Natalie Cole to name a few), who was most impressed by this young singer – and he immediately assumed a mentoring role. “And then all of a sudden, with Mike’s help, I was recording a demo and Concord Records got a hold of it,” she says.

An hour into her first meeting with the label, the 17-year-old Boheme was invited to join the Concord Roster. “Erin is one of those rare finds, a brilliant interpreter of song who truly conveys the emotion behind every word,” says John Burk, GRAMMY® Award winning producer and Chief Creative Officer and label head for Concord Jazz & Classics Group. “I was struck by the depth and maturity of Erin’s songwriting. From the first time I heard her, I knew she was an incredibly gifted artist.”

What A Life is more than just “the next album.” It’s also the next chapter in the evolution of an artist who took her first steps in front of the entire world at a young age and continues to discover the richness and potential of her own voice and her own muse. What A Life is set for release February 5, 2013, on Heads Up International, a division of Concord Music Group.

During her first year in LA, 2004, Boheme and her mother went to The Grove, to hear a young singer give a free concert in support of his recently released CD – this talented young man’s name was Michael Bublé. Erin watched and listened intently, not only learning a great deal from his performance, but having a powerful feeling that the two of them would somehow work together in the future. Boheme believes in destiny – that ‘fate is an angel who watches over our dreams’. Five years later, Michael Bublé began producing Erin’s second CD, What A Life, which is the first CD Bublé has ever produced for another singer.

Michael discovered Erin’s individuality at expressing herself about relationships in music. He also uncovered her talent as a pop singer – portraying her in the same light as one of her all-time heroes: Carly Simon. Similarly, Erin can be, and is, a pop voice for her own generation.

“After hearing a few examples of the songs I wrote, Bublé and John Burk encouraged me to keep writing,” says Erin. “So this album developed into a more raw, very singer-songwriter type of project: a chronicle of my life so far.”

For Erin, What A Life has been five years in the making. But, like fine wine– special things can take a little extra time to reach their zenith. Michael Bublé found a rare gem in the talents of a girl named Boheme, and presents her here, for your consideration. This is her musical diary: a peek into the heart of a girl who is destined to live a most extraordinary life.

It would not be complete to talk about Erin Boheme’s life without mentioning her insane devotion to American Football, and in particular to the Green Bay Packers. Warning: Do not try to phone her during a Packers game!! In addition to being a fan, she is also an owner of the team – her family is one of 100,000 Green Bay Packers owners – and extremely proud of it!

And so, at the young age of twenty-five, Boheme is charged up like her prized championship team waiting for the next game to begin. Her music, like her life, and her team, all appear to be firmly rooted in destiny.

What A Life - Erin Live