James Victor Scott, known as „Little“ Jimmy Scott, was born on 17 th of July 1925, the third of ten children in Cleveland. Ray Charles describes Jimmy's singing, "This man is all about feeling. He defined what 'soul' is all about in singing long before anyone was using that word!" 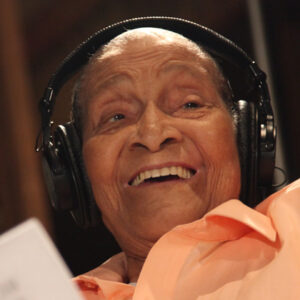 Scott was born in Cleveland, Ohio, to Authur and Justine Stanard Scott, the third in a family of ten. As a child Jimmy got his first singing experience by his mother’s side at the family piano, and later, in church choir. At thirteen, he was orphaned when his mother was killed by a drunk driver.

He first rose to national prominence as “Little Jimmy Scott” in the Lionel Hampton Band when he sang lead on the late 1940s hit “Everybody’s Somebody’s Fool”, recorded in December 1949, and which became a top ten R&B hit in 1950. Credit on the label, however, went to “Lionel Hampton and vocalists”, so the singer’s name did not appear on any of the songs. This omission of credit was not only a slight to Scott’s talent but a big blow to his career. A similar professional insult occurred several years later when his vocal on “Embraceable You” with Charlie Parker, on the album One Night in Birdland, was credited to female vocalist Chubby Newsome.

In 1963, it looked as though Scott’s luck had changed for the good. He was signed to Ray Charles’ Tangerine Records label, under the supervision of Charles himself, creating what is considered by many to be one of the great jazz vocal albums of all time, Falling in Love is Wonderful.
Owing to obligations on a contract that Scott had signed earlier with Herman Lubinsky, the record was yanked from the shelves in a matter of days, while Jimmy was honeymooning. Forty years later this cult album became available to the public again. Scott disputes the “lifetime” contract; Lubinsky loaned Jimmy out to Syd Nathan at King Records for 45 recordings in 1957–58. Another album, The Source (1969), was not released until 2001.

Scott’s career faded by the late 1960s and he returned to his native Cleveland to work as a hospital orderly, shipping clerk and as an elevator operator in a hotel.

Scott’s career has spanned sixty-five years. He has performed with Charlie Parker, Sarah Vaughan, Lester Young, Lionel Hampton, Charles Mingus, Fats Navarro, Quincy Jones, Bud Powell, Ray Charles, Wynton Marsalis, and Peter Cincotti. He has also performed with a host of musicians from other genres of music, such as David Byrne, Lou Reed, Flea, Michael Stipe, and Antony & The Johnsons. Scott performed at President Dwight Eisenhower’s (1953) and President Bill Clinton’s (1993) inaugurations, where he sang the same song, “Why Was I Born?”. Most recently Scott has appeared in live performances with Pink Martini, and he continues to perform internationally at music festivals and at his own concerts.

In 2007, Scott received the 2007 NEA Jazz Master Award. He also received the Kennedy Center’s “Jazz In Our Time” Living Legend Award, and N.A.B.O.B.’s Pioneer Award in 2007. In September 2008 he did a “two-day video interview” at his Vegas home with the “Smithsonian Institute for the National Archives”. Scott and his wife Jeanie have been living in Las Vegas, Nevada since 2007, after living in Euclid, Ohio, for 10 years.

Scott eventually resurfaced in 1991 when he sang at the funeral of his long-time friend Doc Pomus, an event that single-handedly sparked his career renaissance. Afterwards Lou Reed recruited him to sing back-up on the track “Power and Glory” from his 1992 album Magic and Loss, which was inspired, to an extent, by Pomus’s death. Scott was seen on the series finale of David Lynch’s television series Twin Peaks, singing “Sycamore Trees”, a song with lyrics by Lynch and music by Angelo Badalamenti. Scott was featured on the soundtrack of the follow-up film, Twin Peaks: Fire Walk with Me.