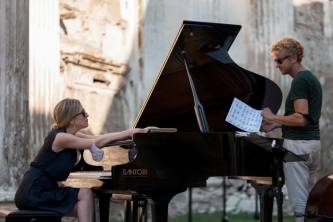 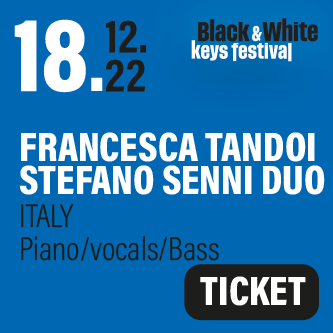 Italian jazz pianist and singer Francesca Tandoi has been hailed by critics and peers as a rising jazz star and one of the most enthralling young talents on the International jazz scene.

In just a few short years, she has earned international acclaim as a world-class pianist and vocalist. She has performed with some of the finest international jazz musicians.

Tandoi’s Duo performances have been warmly received by audiences and the press. Her stage presence is praised time and again as an explosion of swing, strong and sophisticated.

Jazz journalist David Alston of South Africa said, “She has a flawless technique and the ability to swing like the clappers. The audience is simply knocked out by her playing.”

“Francesca Tandoi has truly impressive piano skills,” raved Dutch magazine JazzFlits. “She literally flies over the keyboard. And she’s blessed with a beautiful singing voice full of warmth and sensuality.”

In addition to calling her singing ballads “exemplary, actually unforgettable,” jazz journalist Massimo Tarabelli (Ancona Jazz,IT) places her among the greats: “How many of the world’s young pianists resonate with the greatest virtuoso swinging jazz pianists—Oscar Peterson, Monty Alexander, Gene Harris, Phineas Newborn? Not many. How many of those are women? Very, very few. How many of those are Italian? Probably none. It’s incredible but true that such a person exists, and her name is Francesca Tandoi. She’s a brilliant, superior, and very rare talent.”

Well-known pianists Monty Alexander was positively carried away by her debut album.

Alexander said, “Francesca Tandoi is a supremely tasteful swinging piano player. Her vocals are exquisite, her compositions are melodic and memorable, and her arrangements are extremely thoughtful.”

She appears in more than 20 recordings as a sideman ( four with legendary american saxophonist Scott Hamilton) but the piano trio is definetely her favorite setting.

As leader of her trio’s she recorded four albums, “For Elvira”, ”Something blue” “Magic Three” and “Wind dance” (this album appears in the TOP10 best albums of 2016 of the japanise magazine “Jazz Life”)